AFN 6.2 Billion Committed to Continued Cooperation between Afghanistan and Germany

Kabul, 3rd November 2019 – Yesterday, the State Secretary of the German Federal Ministry for Economic Cooperation and Development (BMZ), Mr Martin Jaeger, together with Dr Mohammad Humayon Qayoumi, Afghanistan’s Acting Minister of Finance, affirmed the continued German support to Afghanistan. By the end of 2019, the German government via the BMZ is making an additional AFN 6.2 billion(EUR 72 million) available to Afghan-German Cooperation projects, bringing the total commitment in the year 2019 to AFN 18.1 billion (EUR 211 million).

State Secretary Jaeger stated, ‘Germany is prepared to continue to support Afghanistan on its path towards peace and democracy. Any future support needs to build upon the development gains made since 2001, particularly those which have benefitted women and girls. Germany will continue to play a prominent role as a long-term supporter of Afghanistan.’ 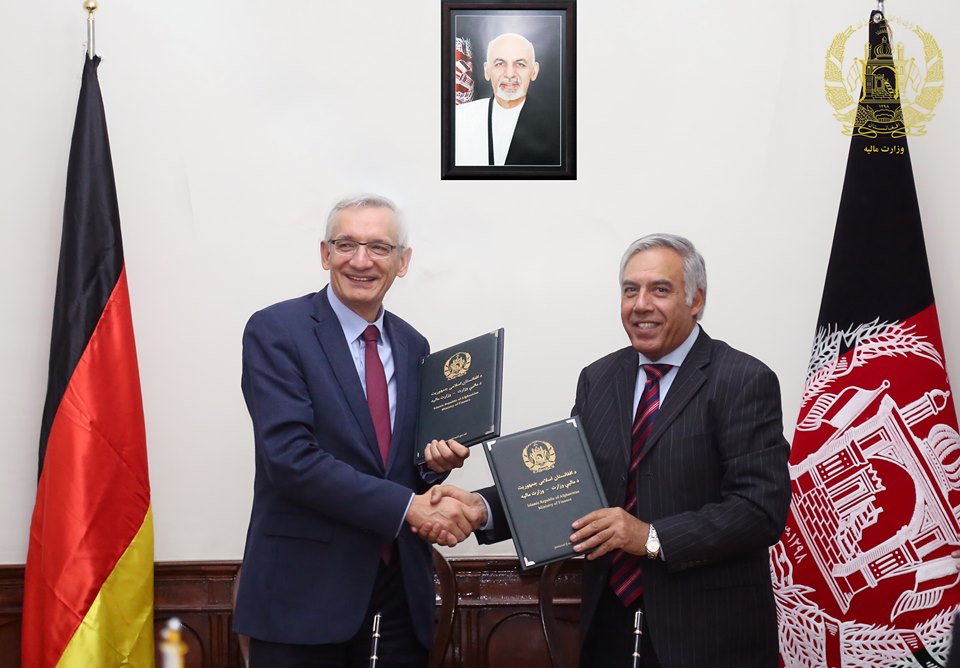 In 2019, a total of AFN 14.1 billion (EUR 164.5 million) has been dedicated towards Financial Cooperation and AFN 4 billion (EUR 46.5 million) towards Technical Cooperation.Germany is eager to maintain its commitment as long as the Afghan state increases its anti-corruption measures, promotes good governance, and implements agreed reforms.The BMZ will thus continue to tie part of its funding to the accomplishment of indicators on good governance as stated in the Geneva Mutual Accountability Framework (GMAF), and to successful reforms and progress, especially on operations and maintenance in the energy sector. If these conditions are not met, part of the funding can be withheld.

Of the additional AFN 6.2 Billion (EUR 72 million)commitment, an amount of AFN 4.6 billion(EUR 53.5 million) in funds is allocated for Financial Cooperation to ongoing projects, including the Improvement of Power Supply by Renewable Energy and Energy Efficiency, the Kunduz-Kholm National Highway, and the Regional Infrastructure Development Fund (RIDF).The RIDF programme improves economic and social infrastructure in Northern Afghanistan while enabling provincial administrations to plan and implement development programmes independently.

During government negotiations in April 2019, the German government made a commitment of AFN 5 billion (EUR 59 million) towards development cooperation. A further amount of AFN 6.8 billion (EUR 80 million) was provided for the financing of the Afghanistan Reconstruction Trust Fund (ARTF) in September 2019. This World Bank administered fund seeks to stabilise Afghanistan by promoting good governance.

The continued commitment follows the GMAF, mapped out at the Geneva Conference in 2018, which stresses the mutual accountability between the Government of the Islamic Republic of Afghanistan and the international community, and provides an important basis for cooperation. The continued German commitment also contributes to the international commitment laid out in the Brussels Conference in 2016, which ensures continued international political and financial support for Afghanistan until 2020in order to build a strong Afghan-led state and strong institutions.

Furthermore, these continued commitments provide an opportunity for both the German and the Afghan sides to align their contributions and meet their national requirements for the global Sustainable Development Goals (SDGs) set out by the Paris Agreement.

H.E. Prof. Mohammad Humayon Qayoumi, Acting Minister of Finance and Chief Advisor on Infrastructure to H.E. the President, according to public expenditure and finance law, clarified the. . .